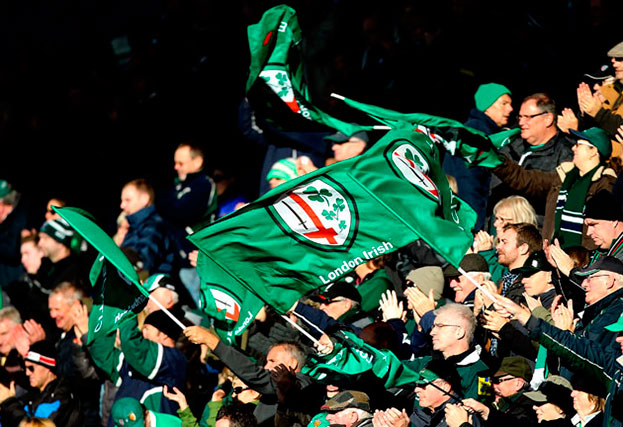 London Irish was founded in 1898 as a home-from-home for the Irish expatriate sporting community in the capital. Since then the club has welcomed players and supporters alike from around the world and now reflects the cosmopolitan nature of both modern London and modern Ireland.

A founder member of Premiership Rugby in 1996, London Irish won the English domestic cup in 2002, played in the 2009 Premiership Rugby final, and has reached the latter stages of domestic and European rugby on several occasions.Currently based at the Madejski Stadium in Reading, London Irish attracts supporters from West London, the Thames Valley and further afield, who are now watching a team lead the RFU Championship going into the second half of the 2018/19 season.

For London Irish, fan engagement is a critical part of ensuring that the club is successful. The club currently play in one of the largest stadiums in English rugby and once boasted the record attendance for any single rugby union match in the Premiership. However, with a supporter base spread across a large geographical area, combined with the recent relegation from the top flight of English rugby has had an impact on ticket sales and the club is naturally keen to maximise its reach within its wide fan base.

Having shared a permanent home with Reading Football Club since 2000, London Irish has not historically required significant investment in IT infrastructure or marketing. The club has relied on Reading Football Club to provide ticketing support and, while this keeps costs manageable, it limits the control and capability of the club to engage with their fans effectively.The club has a database of season ticket holders that it can engage with as well as a significant number of supporters who attend occasional rather than regular matches. London Irish was looking for a simple way to deploy a marketing solution that enabled them to tailor communications with their fans and keep supporters updated with information and latest offers.

London Irish approached Apifonica, a leading voice and message solutions provider to understand more about how the club could deploy technology to engage more effectively with fans.

Apifonica provides easy to deploy advanced telecommunications marketing tools to help companies engage with customers. Importantly the marketing messages created can be delivered via the phone, the mobile, the web or through social media, ensuring that communication is always relevant and timely.

Apifonica’s services are cloud-based, which means they can be scaled from campaigns focused on a small number up to millions of people. This also significantly reduced the need to invest in IT communications infrastructure. London Irish could simply create personalised messages and deliver them to the target audience quickly and simply. Apifonica created a bespoke campaign for London Irish, focused on delivering relevant information via SMS.

SMS is one of the most engaging forms of communication from organisations to customers. SMS is universal – every single mobile phone is, by default, able to send and receive SMS. It is also an extremely popular form of communication – 90% of text messages are read within three minutes of being received and open rates are 99%, compared to less than 20% for email.

One of the key assets that London Irish has is its playing staff. More than 100 current and former players have represented their country at international level and the bond between regular supporters and players is strong.

Apifonica arranged for London Irish to regularly send out video and audio communications to season ticket holders from the playing staff, including messages of thanks for their support as well as delivering news before it was released to the general public. These communications were simple to access and timely, enabling supporters to feel closer to the players.

Included in each communication were special offers for additional tickets, food and beverage deals and offers on merchandise. This provided season ticket holders at London Irish not only with exclusive branded content but also access to deals unavailable elsewhere, adding value to their membership.

London Irish has now been using Apifonica’s services for six months and the results have been impressive.

Sam Windridge, London Irish’s Head of Commercial at the club is convinced by the value of the service.

“We have seen a significant uptick in attendance in light of the messages that have been sent with Apifonica,” he comments. “The impact is almost immediate. We send out a message and within an hour we see a significant increase in ticket sales.”

The positive outcomes are not limited to ticket sales. Take up of special season ticket offers of merchandise and food and drink have both seen double digit growth.

For Windridge, however, the commercial benefits are not the entire story.

“We see a significant jump in social media engagement as soon as messages are sent,” he comments. “This is important because we have worked hard with Apifonica to ensure our season ticket holders do not simply see these messages as an opportunity to exploit them. The reality is that it is an opportunity to engage with them, understand more about what drives them and help us serve them better. The reaction that we have seen has been overwhelmingly positive and supportive, meaning that the messages are appreciated as well as commercially successful.”

London Irish now plans to further roll out its communications with fans in the future, extending the activity to more casual supporters in a bid to create season ticket holders of the future.

Windridge concludes: “Apifonica’s service has given us more understanding for how we can maximise exposure and increase support in the future, and can see the benefits of extending the communications to the wider fanbase.”

Simple to deploy and use

The Apifonica platform can be rolled out in a matter of days and London Irish was sending targeted messages within one week. As the partnership grew, London Irish could create and send a range of different communications quickly and effectively

As confidence grew in the power of the Apifonica platform, London Irish has been able to deploy more complex messages with voice and video included. Combining player messages to fans with special offers has been particularly successful

London Irish saw an instant and significant return by deploying Apifonica’s communications platform. “We can literally message people on a match day about a particular subject and see an immediate response,” comments Windridge. “We see Apifonica as a strategic partner to help us engage more widely with our customers.”