Walk down any Polish city street and you will see outlets of the successful retail company. With so many stores it’s not surprising they experience issues when recruiting so the decision to automate the process using Apifonica HR Voicebot is objective and understandable. Results following integration were impressive with significant time and costs saved!

How to tackle the mass hiring challenge with HR Voicebot

Candidate screening is traditionally the most time-consuming stage of the hiring process. According to Google and Jobvite studies, 60% of time spent to fill in a position is used in screening.

HR Voicebot Use by Hebe

The client is a cosmetics retail chain, a part of an international group, expanding its storage facilities. It had dozens of open jobs attracting up to 300 applicants monthly. The HR Voicebot’s task was to filter out irrelevant applications and select the best candidates based on a set of requirements.

The HR department designed a simple questionnaire to qualify applicants based on work experience, salary expectations and location. The HR Voicebot called each candidate on the phone, conducted an interview, processed answers and selected the candidates that met the client’s criteria. Those who had passed the screening interview had an option to schedule a face-to-face interview with a recruiter.

The campaign results are shown below. 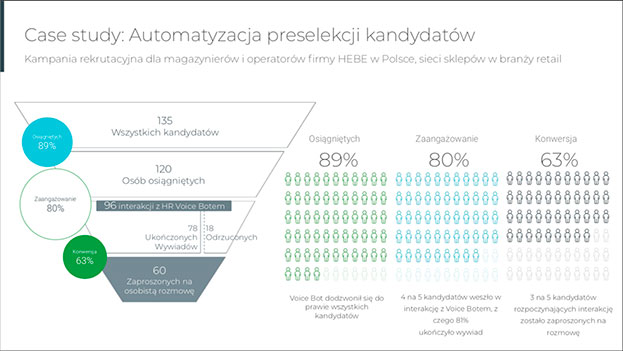 “The first days with VoiceBot were quite difficult, but now it goes very smoothly It made the recruitment process easier - we spend much less time describing our offer to the candidates,” the representative for the company says.

Go to HR Voicebot Page to make a request like HEBE?