Walk down any Polish city street and you will see outlets of the successful retail company and vehicles of the big delivery company. Both companies experience issues when recruiting so the decision to automate the process using Apifonica HR Voicebot is objective and understandable. Results following integration were impressive with significant time and costs saved!

How to tackle the mass hiring challenge with HR Voicebot

Candidate screening is traditionally the most time-consuming stage of the hiring process. According to Google and Jobvite studies, 60% of time spent to fill in a position is used in screening.

The client is a nationwide cosmetics retail company expanding its storage facilities. It had dozens of open jobs attracting up to 500 applicants monthly. Handling the volume of applications was overwhelming the HR department. The HR Voicebot’s task was to filter out irrelevant applications, select the best candidates based on a set of requirements and schedule personal interviews with a recruiter.

The HR department designed a simple questionnaire to qualify applicants based on work experience, salary expectations and location. The HR Voicebot called each candidate on the phone, conducted an interview, processed answers and selected the candidates that met the client’s criteria. Those who had passed the screening interview had an option to schedule a face-to-face interview with a recruiter. They received an SMS with a link to a recruiter’s web calendar where they could choose an available timeslot for the meeting.

As a result, 80% of candidates answered the call, 80% of those interacted with the Voicebot, 80% of those completed the interview and 60% of those qualified for a personal interview with the recruiter. The campaign results are shown below. 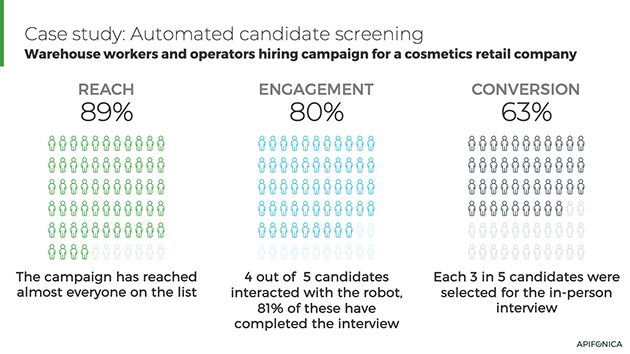 Casy Study: Automated Candidate Screening
Warehouse worker and operator hire campign for a cosmetics retail company
Reach, Engagement, Conversion
The campaign reached almost everyone on the list
4 out of 5 candidates interacted with the robot. 81% of these candidates completed the interview
3 out of 5 candidates were selected for the in-person interview
The HR Voicebot conducted all interviews simultaneously so that the final selection of qualified candidates was delivered to the client in mere minutes.

HR Voicebot for a transport company

The second client is a transportation company hiring delivery staff for last-mile deliveries. It had a lower number of applications per position but manually checking applications and selecting candidates would have been incredibly time-consuming regardless. HR Voicebot completed the task in minutes.

Campaign logic was the same: call applicants on the phone, conduct interviews, process answers, deliver a filtered list of qualified candidates to the client and schedule interviews with the company’s HR person. Campaign results are shown in the graph below. 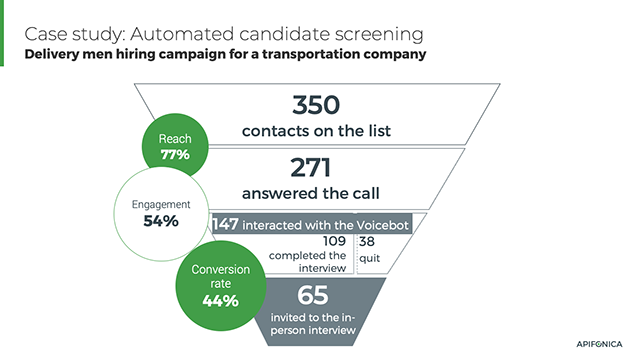 In both cases, the engagement rate shows that applicants interact with the HR Voicebot willingly. Of those who begin the interaction, only a small percentage quit before completion.